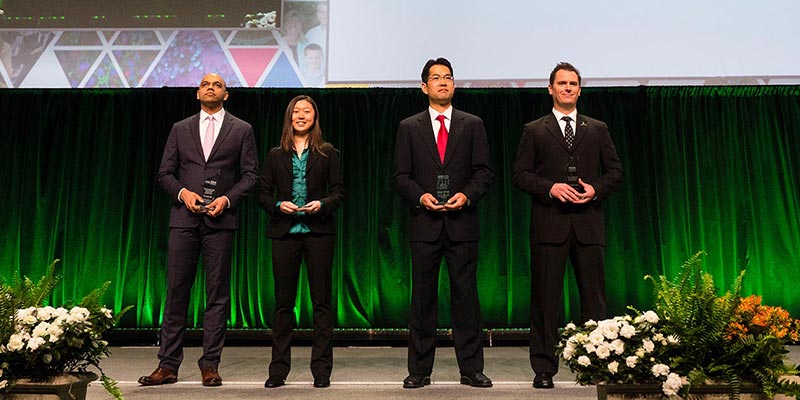 The AACR grants program is a critical driver of exciting and innovative cancer research. Over the past two decades, more than $300 million in grants has been awarded and administered through a rigorous peer-reviewed grants program. Continued growth of the grants program in 2016 was fueled through new and enhanced partnerships with nonprofit organizations and pharmaceutical companies. This vital support enabled the AACR to extend its reach even further, providing resources to support basic, translational, and clinical research in the United States as well as Canada, Germany, Spain, and Italy.

Scientists were funded in 2016; these investigators—including Holly Martinson, PhD (right)—received more than $8.2 million to support work that spans the spectrum of cancer research.

Grant applications were evaluated in 2016.

In funding was awarded to mentored scientists, providing critical resources to support the career development of the next generation of researchers.

Was awarded through partnerships with the pharmaceutical industry, including the new AACR-Bayer Innovation and Discovery Grants.

Was awarded to the inaugural recipients of the AACR NextGen Grants for Transformative Cancer Research, supported by the AACR, Bayer, Incyte, and Takeda Oncology.

AACR members served on 16 scientific review committees to select the 2016 grant recipients. The AACR is grateful to these committee members for their expert assistance.

The AACR is grateful to all of its research grant funders for their generous support. 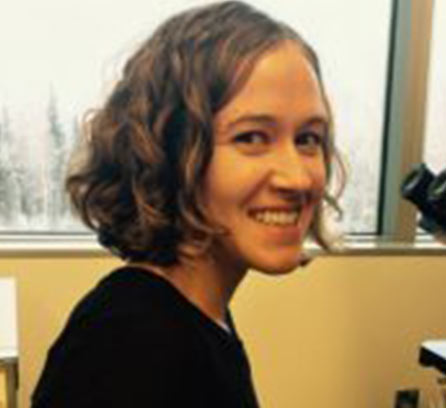 Holly Martinson, PhD is a postdoctoral fellow studying health disparities in the Alaska Native population at the University of Alaska, Anchorage (UAA). She is a recipient of a Debbie’s Dream Foundation-AACR Gastric Cancer Research Fellowship, which supports the efforts postdoctoral or clinical research fellows to conduct gastric cancer research and to establish a successful career path in this field. Born and raised in Anchorage, Dr. Martinson is the first Alaskan to receive an AACR grant:

“I am one of the only cancer researchers in the state of Alaska, so the connections I’ve made with other leaders in the gastric cancer field as a result of receiving this grant have been instrumental to my career development and success in establishing my own cancer research lab at UAA.

One of the largest health disparities in the Alaska Native population relates to gastric cancer. Members of the Alaska Native population are three times more likely to be diagnosed with gastric cancer and four times more likely to die from it than Caucasians in the United States. My research goal is to better distinguish patients that are at high risk of developing gastric cancer and to identify alternative treatments for patients that don’t respond to current therapies." 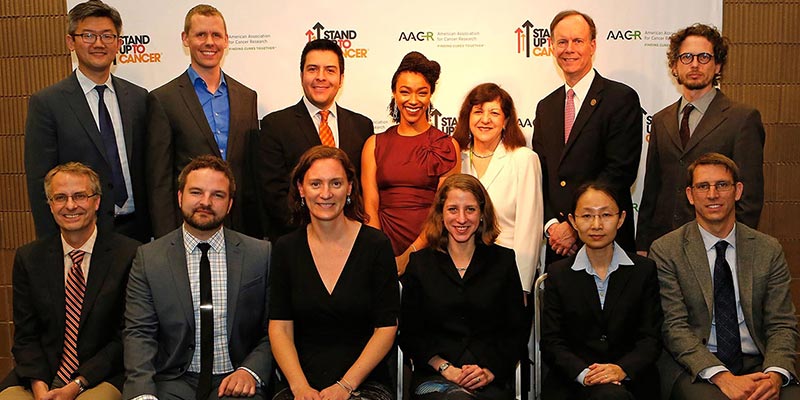 The AACR and Stand Up To Cancer: Partners to Accelerate Progress

The AACR is proud to serve as the Scientific Partner of Stand Up To Cancer (SU2C), an organization that harnesses the collective power of the entertainment industry to support collaborative, translational cancer research. With ongoing oversight of scientific peer review and grants administration from the AACR, SU2C developed new funding partnerships to enable the launch of transformative new programs in 2016.

In 2016, SU2C along with the AACR launched SU2C Catalyst™, a new program that utilizes funds and products from the pharmaceutical, biotechnology, diagnostic, and medical device industries to accelerate research on cancer prevention, detection, and treatment. Merck is the Founding Collaborator. Bristol-Myers Squibb Company and Genentech, a member of the Roche Group, are Charter Supporters. Under the SU2C Catalyst program, these companies donate funds to support collaborative research studies using their products, such as diagnostic tests, new pharmaceutical compounds under development, approved agents, and immuno-oncology products that can be investigated for other uses.

Working with an expert Executive Committee, the AACR managed the selection process for projects funded by Merck and Bristol-Myers Squibb in 2016.

The fundamental principles of the Stand Up To Cancer funding model are collaboration, innovation, acceleration, targeted therapy, and translational research. These principles are exemplified by the SU2C Dream Team, a scientific task force comprising leading researchers from different institutions who collaborate to develop new and improved approaches to cancer treatment. By removing barriers to creativity and collaboration, the Dream Team model accelerates the progress of therapies from the laboratory to the clinic.

Since SU2C was founded in 2008, a total of 19 Dream Teams have been established and more than $213 million has been committed to fund their efforts. As the Scientific Partner of SU2C, the AACR has provided scientific leadership, expert peer review, scientific oversight, and grants administration to the Dream Team program. The Scientific Advisory Committee (SAC), led by Nobel Laureate Phillip A. Sharp, PhD, FAACR, identifies the most promising Dream Team projects. Two of these innovative projects were launched in 2016: 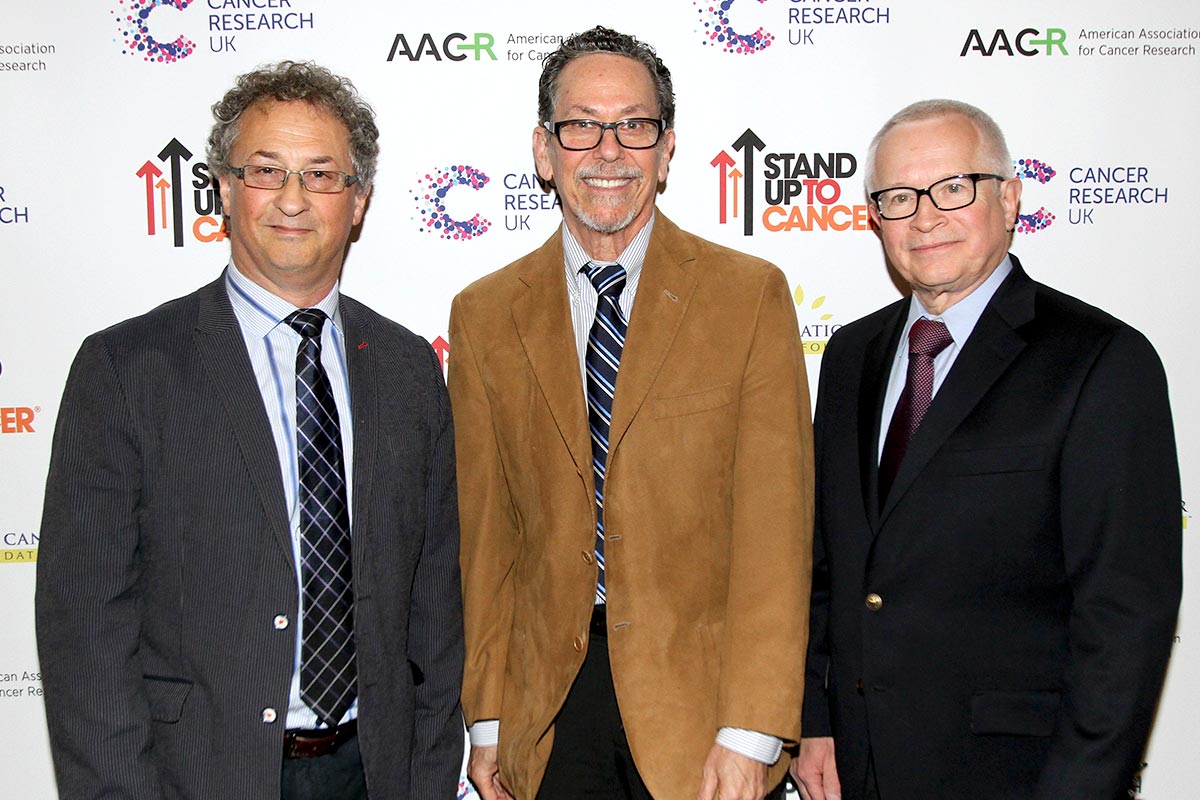 The AACR continued to manage the selection process for the SU2C Phillip A. Sharp Innovation in Collaboration Awards, named for the Nobel laureate and chair of the SU2C Scientific Advisory Committee. The 2016 awards—totaling $1 million—went to five research teams, each of which paired a senior investigator with a more junior investigator from a different institution. These unique collaborations will accelerate the development of new therapies to benefit cancer patients.

During the broadcast Ken Jeong, the comedic actor, who is also a physician, discussed the AACR’s central role as Scientific Partner to SU2C. “The AACR works with scientific advisors to make sure funding goes to the right places, the right labs, [and] the right scientists, and that there is rigorous oversight of research progress,” Jeong said. “Their dedication makes all this happen.” 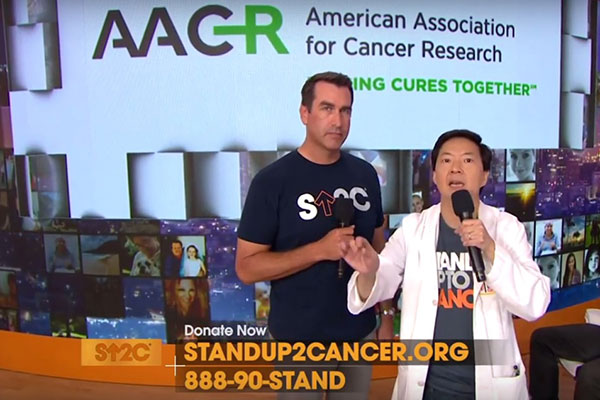 The 2016 SU2C Scientific Summit, organized by the AACR, gathered the entire SU2C community for updates on the scientific achievements of the various SU2C-funded projects. The summit explored cross-cutting themes and possibilities for collaboration across research teams.

Dream Team members, Translational Team members, and Innovative Research Grant recipients discussed the potential of their novel research projects with members of the Scientific Advisory Committee and the Joint Scientific Advisory Committees. These discussions were inspired by presentations from guest speakers Andrew Conrad, PhD, of Verily (formerly Google Life Sciences) and Douglas R. Lowy, MD, FAACR, acting director of the National Cancer Institute. Also in attendance were the SU2C Council of Founders and Advisors and members of the patient advocate community, who reminded the scientists of the urgency of their challenge. 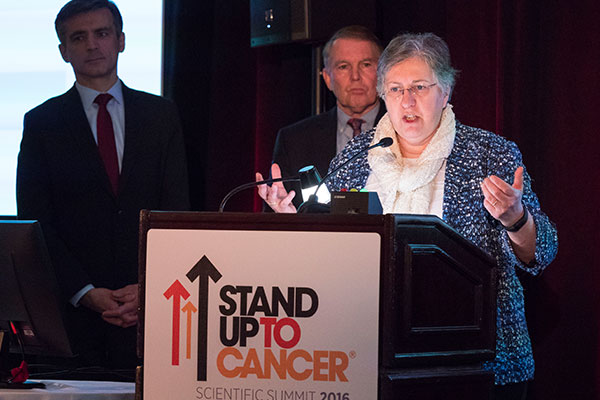